RiverXchange® is a program of Ciudad Soil and Water Conservation District. The program is managed by our team of talented educational professionals. 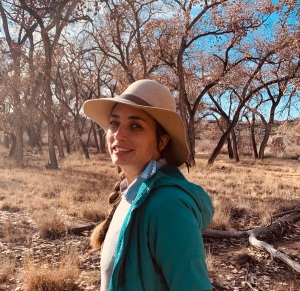 Erin hails from coastal California where she developed her passion for environmental education and earned her bachelor’s degree from UC Santa Cruz in Environmental Studies and Biology. Her move to Albuquerque seven years ago was not by accident, for she had always felt a love for the state and people of New Mexico since her first visit in the early 2000s. Since moving to Albuquerque in 2013, she has started a family, founded LivLab Studios Tiny Home business with her husband, and completed her Master’s degree from Lesley University’s Graduate School of Education.  In 2018 she was hired as an educational consultant for RiverXchange and Arroyo Classroom and became the Education Coordinator for Ciudad Soil and Water Conservation District in January 2020. Ultimately, through her work, she hopes that by emphasizing place-based education she can help empower learners of all ages to both protect natural resources for all life and to activate urban places in ways that support ecological resilience.

For the last decade, Jenny has worked as a biologist and professor, researcher, and outdoor guide. She’s been involved in countless community education projects that teach ecology and environmental issues to families and had the pleasure of partnering with state-wide initiatives that focus on getting kids outside. She is the master-mind behind Nature Matters Academy and provides exceptional support to RiverXchange and other Ciudad SWCD programs.